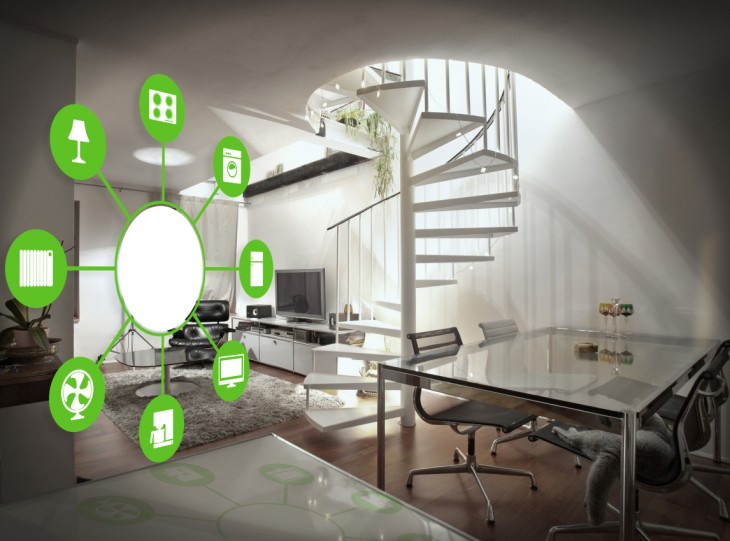 Imagine walking through the bathroom door at 7am and the shower starts itself at optimal water heat and pressure. The thermostat adjusts when you enter the room. Want a new bathroom tub? What if you could 3D print it? High-tech homes are about to revolutionize the way we live.

While interior design once relied on color schemes and playful accents, new tech trends are completely revamping how we design, build and live in our spaces. Even more, they’re having a social impact, enabling users to reduce their carbon footprints and increase efficiency as they go about their daily lives.

3D printing, virtual reality and the Internet of Things (IoT) have just recently began to appear in our houses, but they’re making an incredible impact. So what capabilities do these tech trends have? And what will they look like further in the future?

3D printers can create car parts and prosthetics. They can even build entire houses. Amsterdam boasts the 3D Print Canal House, a 13-room building and museum built entirely by a giant 3D printer, called the KamerMaker. The KamerMaker 2.0 is currently underway, and prints an area about as tall as a water bottle every second. An Italian engineering company is also working on building a 3D-printed house, and believes similar ones could be built in developing countries where sturdier structures are needed. So while we may not see entire neighborhoods being built by 3D printers just yet, it’s something to look forward to in the future.

We won’t be able to remember a time before we weren’t able to 3D print a new bathroom tub.
It’s not to say that 3D printing isn’t mainstream yet. It is. Companies like Shapeways have users design and order their own 3D-printed items. Customers may design their items using 3D sketch apps like GravitySketch, send it to Shapeways and have their items sent directly to them. What’s more, the company lists dozens of ready-made items for the home — from book shelves to wall art — at prices comparable to High Street stores. Most items are less than US$40.

“You’ll have a say in what materials you will use, what your materials will look like, and how they are made,” said Peter Limburg, Head of Business Development and Sales at Shapeways. “Mass-manufacturing is made to eliminate as much variety as we can. With 3D printing, we are allowing things to be more personal. The joy from our products will be a lot higher.”

3D printing also means we don’t rely on factories that are oceans away. Shapeways’ factory is located in Long Island, NY, and ships out 200,000 unique items each month. Additionally, 3D-printed items produce less waste — the process uses exactly the amount of material necessary to make a product and no more, reducing an individual’s carbon footprint.

People involved in the industry have been forward-thinking entrepreneurs. However, as 3D printing moves to the mainstream, larger companies like HP are jumping on the bandwagon. Ricoh and Canon have both announced they will release printers, too. Limburg says these larger companies will help bring down prices and drive innovation, benefitting the entire industry. It’s confirmation, he says, that 3D printing is here to stay.

VR and AR will soon play a critical role in helping people make better decisions in regards to interior design and online shopping. The tech tools will help consumers choose big-ticket items, allowing them to see how all the elements will fit into their homes without having to purchase them.

Furniture companies in particular are using AR apps. Littlewoods and Very have developed AR apps that act like a personalized catalog. Instead of having to visualize how a piece of furniture will look in their home, users can scan their room with their camera and virtually place the furniture in 3D. DIRTT, a company that uses technology to manufacture highly customizable interiors, uses a VR app in their furniture showroom, increasing their in-store experience.

Alper Guler is the founder of AR Pandora, a company that develops AR and VR apps. He says that people are now starting to try Google Cardboard experiences at home because they are very affordable and available through most mobile phones. However, people will be more likely to try devices such as Oculus Rift and HTC Vive in physical stores and showrooms because those devices require expensive computers to run. The headgear itself cost more than US$500, as opposed to $15 for Google Cardboard. “Retailers will benefit from this by helping their customers visualize better. These technologies will help them sell more, and I think faster,” said Guler.

VR in particular will put clients in their newly designed spaces before they even exist, offering an experience far beyond viewing flat images of their designs. Facebook has even showcased its social VR, which allows people to interact in VR together.

It may seem far-fetched — reports show it will take 6-8 years for VR to go mainstream — but Facebook’s social VR pushes the boundaries. The whole notion could soon become a reality for clients and interior designers, enabling them to meet and discuss designs in VR from miles away and feel as if they are in the same new room.

The Internet of Things (IoT)

IoT encompasses a wide range of in-home capabilities. From thermostats to lightbulbs, ordinary objects have been given serious upgrades with IoT technology. And widespread adoption of this technology will lead to substantial energy savings. According to a study by the Consumer Technology Association, IoT could help avoid up to 100 million tons of CO2 emissions, and reduce energy consumption in each household by 10 percent.

Voice-activated platforms have been popular among larger tech companies. Google just announced it would launch a voice-activated home device integrated with Google search capabilities. This would be similar to Amazon Echo, a device that sits in your home and acts as, really, a personal assistant. The Amazon device is powered by Alexa — when you speak to her, she’ll do things like turn on lights, play music and set up your Wi-Fi network.
AdMobilize just built the MATRIX device, a product made to simplify the IoT space. Any connected device can be integrated into the MATRIX — it’s a central hub for all the smart devices in a home. The device downloads apps just as a smartphone would — such as ones that detect when you’ve gotten out of bed in order to turn the shower on, for example — allowing for hundreds of capabilities within the home. The technology is also touchless: users only have to gesture with their hands to turn the lights out. However, it’s not on the market yet — the company is just finishing up fabrication and has been taking pre-orders.

The average home may not yet see 3D-printed items or smart devices, but they will soon. More and more AR, VR, 3D printing and IoT will enter our homes — and stay. The devices will alter and improve the way we interact with and customize our homes, until we won’t be able to remember a time before we weren’t able to 3D print a new bathroom tub.