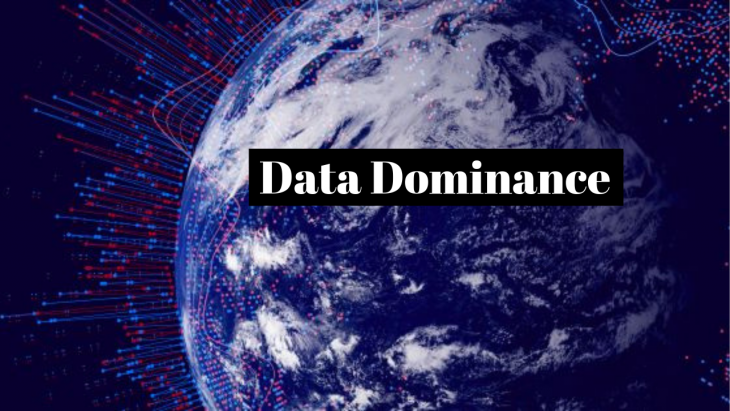 In 2016 and 2017 I spoke with dozens of venture capitalists, many of whom have a specific and overt focus on artificial intelligence technologies. I wanted to know what made an AI company worth investing in, and what business models were generally the most appealing for investment.

It took me almost a year of interviews to come to that conclusion.

That’s the potential promise of artificial intelligence. VCs all want to invest in business models with a defendable “moat”. Companies that can acquire more data and more users in a positive feedback loop have the chance to blast beyond the competition and become nearly unassailable. “The next Google”, or “the next Facebook”, it is said, will be a company predicated on taking advantage of this dynamic.

In this edition of AI Power, I’ll explore the winner-take-all AI dynamic that I refer to as “Data Dominance.” I’ve broken the article out into the following sections:

I’ll start off with a definition and explanation:

Data Dominance – What it is and How it Works

But this isn’t just about acquiring data for data’s sake. Macy’s, Exxon Mobil, and Wells Fargo have access to vastly more data than most businesses that have ever existed – why aren’t they AI innovators?

The flywheel of data dominance does not spin simply because a company has access to data – it is only specific kinds of data that matter. We might think “data dominance data” as having two traits:

Valuable – It can enable beneficial outcomes for users or for business processes.

While it is possible to develop “me too” AI applications (for example, both Spotify and Pandora can recommend music, both Google and Bing can display search results), the more exclusivity, the better. Companies that can collect unique and valuable data, or simply vasty more of that valuable data, will have a distinct advantage in improving their user experience and business processes.

But Macy’s and Wal-Mart aren’t just behind the tech giants (Amazon, Google, Facebook, etc) because of data alone. There are other success factors in enabling the data dominance flywheel – all of which pose major challenges to existing enterprises who have never had a focus on data or AI in the past.

Business AI Context – Business leaders and functional team members (in marketing, in customer service, in inventory, etc) who understand roughly what AI can do, where it can be used, and what problems it can be applied to.

Data Infrastructure – The right data is stored in the right formats. Data from different sources is “harmonized” so that it can be combined, searched, or used to train different kinds of AI models. Important data is treated with care, data is a strategic consideration across business functions.

These three critical factors are part of the reason that digitally-native tech firms (like Google, Facebook, etc) have such an AI advantage.

US Tech Giants – The Poster Children of Data Dominance

Think of it as a data, improvement, and acquisition flywheel. You’ve already seen tech giants nail this dynamic:

Any AI startup is looking for this flywheel dynamic, and they’re pitching this dynamic to VCs.

Any VC interested in AI (i.e. essentially all of them) is looking for this dynamic.

Many savvy thought leaders in the world of “AI ethics” are aware of – and wary of – the power granted by this data dominance loop.

Enterprise leaders are the last group to the party. Most enterprise leaders see AI as another kind of IT tool, or as a means to automate processes and gain efficiencies. Enterprises in manufacturing, pharma, banking, and other sectors are still mostly oblivious to the kind of “economic moat” that can be created by artificial intelligence in the right application.

Over the next five years, company leadership across enterprise sectors will increasingly be aware of this dynamic, and will begin putting together plans to devise AI strategies to do this. Much of our enterprise AI strategy work involves helping large companies find pockets of data advantage to build their own flywheel – to focus on market share expansion instead of simply focusing on efficiencies.

Organizations that leverage the dynamic of data dominance will generally follow a pattern:

Land – Determine a critical business opportunity or challenge, and the critical data that would help to improve the business processes around that opportunity or challenge, or improve the customer/user experience of those who would potentially benefit from it. Collect as many data streams as possible and test how artificial intelligence can use those streams to improve efficiency or user experience. Learn and iterate, determine what kinds of data, and what kinds of algorithms, can deliver value. Focus on scaling access to data streams (acquiring users, retaining users).

Command – Using lessons learned from data access, and using increasing access to torrents of new data, own your position in the market by being able to offer a better product, or a more profitable process. Lock in existing users with data-based benefits they couldn’t get elsewhere.

Expand – Using profits, data streams, and locked-in users, expand to solve adjacent business problems or opportunities, by finding new kinds of data to collect from one’s user base, and delivering more value to users in doing so.

These concepts are somewhat abstract by themselves, so we’ll look at how they might be applied to a company or to a nation:

AI use-case: The software uses data from sensors and HVAC layouts to determine leaks, blockages, and inefficiencies – based on feedback from operators on the site (recording all fixes and issues as they come in). Historical data can be used to train systems to detect a potential failure of HVAC equipment, or energy inefficiencies.

Land: Sell to a variety of large commercial establishments – use venture money to fund pilots and trials to get as many sensors in as many locations as possible. Potentially partner with other HVAC equipment manufacturers and installers to find more ways to get a wide installation-base for sensors and software.

Command: The initial data from the install-base may not be useful for real-world applications – some portions of the data from sensors or user inputs may be completely useless or messy. However, some portions of the data may be found to have predictive value for different kinds of HVAC problems, or may be able to be used to improve efficiencies by detecting patterns of airflow or temperature. The sensors and user inputs could be continually improved to have more and more predictive value.

Expand: This predictive advantage could allow the company to offer immediate benefits to a client in ways that other sensor companies or HVAC equipment companies can’t do – and using their data advantage, they’d be able to win more business – and with more business, win more data. The cycle of data dominance. With enough profit, with enough in-roads in thousands of locations, and with enough experience turning IoT data and user input into predictive value, the company could eventually expand into other kinds of commercial IoT applications, such as security systems, elevators, etc.

AI opportunity: India could focus on refining it’s processes and data streams around crops where it leads in global production (such as buffalo milk, cow milk, mangoes, potatoes, etc). India could also focus on turning its back-end IT and BPO efficiencies into powerful products that could lock in the value of the manual efforts being done by cheap Indian tech and BPO workers.

Land: India could economically incentivize IT and BPO companies to invest in AI and automation, encouraging them to turn their low-cost services into high-value services, making the economy less vulnerable to automation, and more likely to continue the growth and profitability of its tech and BPO sectors.

Command: Indian IT services firms and BPO firms could use the data streams and experience of their workers to become the must-have IT and automation products for enterprises globally, securing their position as “the back office of the world” into the era of AI.

Expand: Indian firms could take their market share and data streams from IT services and BPO and expand them to own a greater and greater share of IT processes and BPO solutions, widening their net of “best-in-class” solutions with an inherent advantage over other firms.

Not Always a Google-Sized Monopoly

eBay, for example, might get better than any other firm when it comes to selling used goods online. This might create lock-in via AI-enabled capabilities (and a well-known brand), but it may never involve a market size anywhere near the size of Amazon.

Our hypothetical example of an HVAC IoT company is also a good example. While such a company might expand into an industrial IoT super-giant, it might also just master certain kinds of HVAC systems, giving it a secure lock-in in the market, but no global predominance like Google or Amazon.

Data dominance works in small or large markets, what matters for a company is their ability to find a pocket of opportunity, own the data streams, and iterate until they are clearly the best product on the market – and continue the flywheel of users turning into data turning into improvement turning into more users.

Dynamics of Power with Data Dominance

Companies or Nations with AI Power

Companies or Nations without AI Power

What This Means for Business Leaders

VCs and startups are almost all aware of the dynamics of data dominance, if not by name. Enterprise leaders and mid-size business leaders are – for the most part – not considering data dominance in their strategic plans. Most see AI as an enabler of efficiencies through automation, rather than an enabler of defensibility and of winning market share.

Executives and leaders might think through some of the frameworks below – which are abbreviated versions of the strategy work we do with clients:

Framework for determining winning AI areas for a new product or service:

Framework for determining winning AI areas for an existing product or service:

In the short term, more and more startups will be explicitly focused on data dominance – and almost any firm with global ambitions will consider this dynamic early in their business planning process.

As a consequence, more and more enterprises will be thinking about their customer base as an enabler of data streams to build product improvements, with the ultimate goal of having the best product on the market.

New regulation may be introduced to encourage data use that doesn’t allow for overt monopoly power, and “monopoly” may be re-thought altogether, potentially leading to the breakup of existing tech giants, and new strategic and practical considerations for companies aiming for data dominance.

While data dominance will continue in startups, small countries, and small companies – the biggest power game will play out between the world’s largest companies (Google, Facebook, Baidu, Tencent) and the world’s two technology superpowers (USA, China). The ultimate goal is to control the computational substrate that houses the majority of human experience, and/or that houses the powerful AI.

Smaller nations and countries will be more-or-less helpless in preventing this dynamic from happening unless the great powers agree to come kind of global transparency and steering of AI technologies.