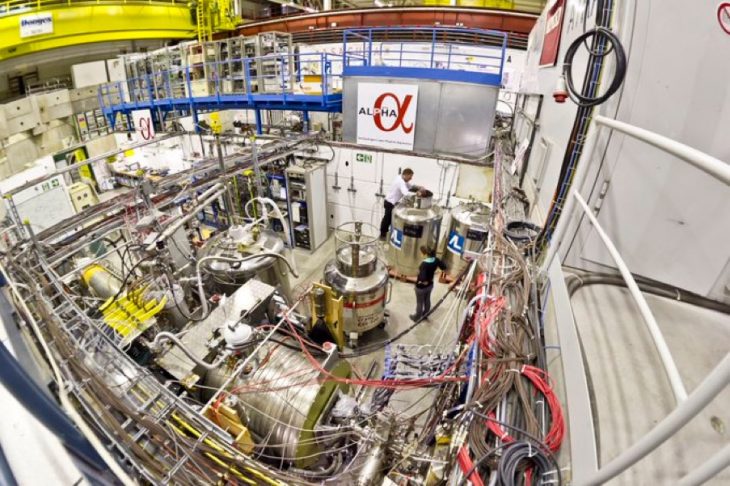 The ALPHA collaboration at CERN has reported the first measurements of certain quantum effects in the energy structure of antihydrogen, the antimattercounterpart of hydrogen. These quantum effects are known to exist in matter, and studying them could reveal as yet unobserved differences between the behaviour of matter and antimatter. The results, described in a paper published today in the journal Nature, show that these first measurements are consistent with theoretical predictions of the effects in “normal” hydrogen, and pave the way for more precise measurements of these and other fundamental quantities.

“Finding any difference between these two forms of matter would shake the foundations of the Standard Model of particle physics, and these new measurements probe aspects of antimatter interaction – such as the Lamb shift – that we have long looked forward to addressing,” says Jeffrey Hangst, spokesperson for the ALPHA experiment.

“Next on our list is chilling large samples of antihydrogen using state-of-the-art laser cooling techniques. These techniques will transform antimatter studies and will allow unprecedentedly high-precision comparisons between matter and antimatter.”

The ALPHAteam creates antihydrogen atoms by binding antiprotons delivered by CERN’s Antiproton Deceleratorwith antielectrons, more commonly called “positrons”. It then confines them in a magnetic trap in an ultra-high vacuum, which prevents them from coming into contact with matter and annihilating. Laser light is then shone onto the trapped atoms to measure their spectral response. This technique helps measure known quantum effects like the so-called fine structure and the Lamb shift, which correspond to tiny splittings in certain energy levels of the atom, and were measured in this study in the antihydrogen atom for the first time. The team previously used this approach to measure other quantum effects in antihydrogen, the latest being a measurement of the Lyman-alpha transition.

The fine structure was measured in atomic hydrogen more than a century ago, and laid the foundation for the introduction of a fundamental constant of nature that describes the strength of the electromagnetic interaction between elementary charged particles. The Lamb shift was discovered in the same system about 70 years ago and was a key element in the development of quantum electrodynamics, the theory of how matter and light interact.

The Lamb-shift measurement, which won Willis Lamb the Nobel Prize in Physics in 1955, was reported in 1947 at the famous Shelter Island conference – the first important opportunity for leaders of the American physics community to gather after the war.

Both the fine structure and the Lamb shift are small splittings in certain energy levels (or spectral lines) of an atom, which can be studied with spectroscopy. The fine-structure splitting of the second energy level of hydrogen is a separation between the so-called 2P3/2 and 2P1/2 levels in the absence of a magnetic field. The splitting is caused by the interaction between the velocity of the atom’s electron and its intrinsic (quantum) rotation. The “classic” Lamb shift is the splitting between the 2S1/2 and 2P1/2 levels, also in the absence of a magnetic field. It is the result of the effect on the electron of quantum fluctuations associated with virtual photons popping in and out of existence in a vacuum.