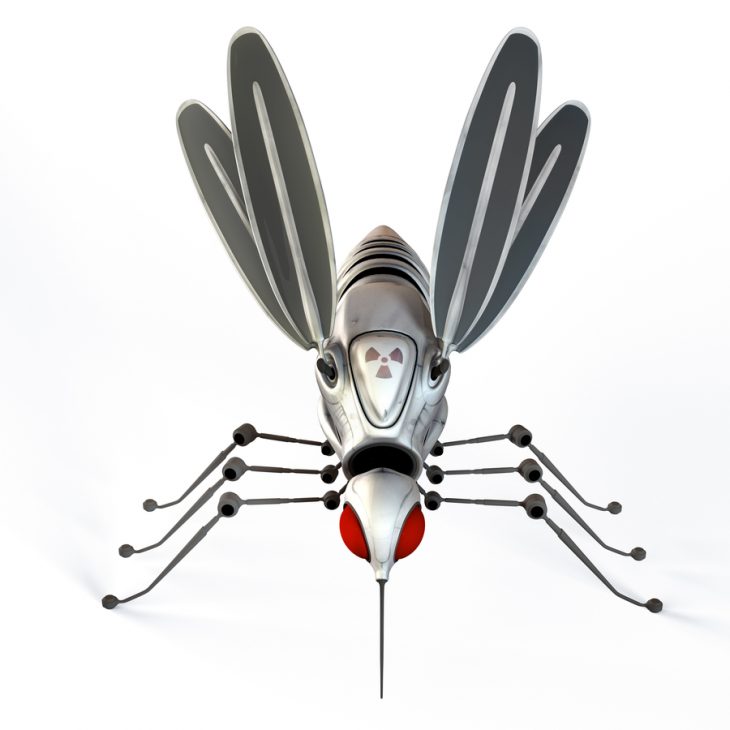 In the movie “Ant-Man,” the title character can shrink in size and travel by soaring on the back of an insect. Now researchers at the University of Washington have developed a tiny wireless steerable camera that can also ride aboard an insect, giving everyone a chance to see an Ant-Man view of the world.

The camera, which streams video to a smartphone at 1 to 5 frames per second, sits on a mechanical arm that can pivot 60 degrees. This allows a viewer to capture a high-resolution, panoramic shot or track a moving object while expending a minimal amount of energy. To demonstrate the versatility of this system, which weighs about 250 milligrams — about one-tenth the weight of a playing card — the team mounted it on top of live beetles and insect-sized robots.

The results will be published July 15 in Science Robotics.

“We have created a low-power, low-weight, wireless camera system that can capture a first-person view of what’s happening from an actual live insect or create vision for small robots,” said senior author Shyam Gollakota, a UW associate professor in the Paul G. Allen School of Computer Science & Engineering. “Vision is so important for communication and for navigation, but it’s extremely challenging to do it at such a small scale. As a result, prior to our work, wireless vision has not been possible for small robots or insects.”

Typical small cameras, such as those used in smartphones, use a lot of power to capture wide-angle, high-resolution photos, and that doesn’t work at the insect scale. While the cameras themselves are lightweight, the batteries they need to support them make the overall system too big and heavy for insects — or insect-sized robots — to lug around. So the team took a lesson from biology.

“Similar to cameras, vision in animals requires a lot of power,” said co-author Sawyer Fuller, a UW assistant professor of mechanical engineering. “It’s less of a big deal in larger creatures like humans, but flies are using 10 to 20% of their resting energy just to power their brains, most of which is devoted to visual processing. To help cut the cost, some flies have a small, high-resolution region of their compound eyes. They turn their heads to steer where they want to see with extra clarity, such as for chasing prey or a mate. This saves power over having high resolution over their entire visual field.”

To mimic an animal’s vision, the researchers used a tiny, ultra-low-power black-and-white camera that can sweep across a field of view with the help of a mechanical arm. The arm moves when the team applies a high voltage, which makes the material bend and move the camera to the desired position. Unless the team applies more power, the arm stays at that angle for about a minute before relaxing back to its original position. This is similar to how people can keep their head turned in one direction for only a short period of time before returning to a more neutral position.

“One advantage to being able to move the camera is that you can get a wide-angle view of what’s happening without consuming a huge amount of power,” said co-lead author Vikram Iyer, a UW doctoral student in electrical and computer engineering. “We can track a moving object without having to spend the energy to move a whole robot. These images are also at a higher resolution than if we used a wide-angle lens, which would create an image with the same number of pixels divided up over a much larger area.”

The camera and arm are controlled via Bluetooth from a smartphone from a distance up to 120 meters away, just a little longer than a football field.

The researchers attached their removable system to the backs of two different types of beetles — a death-feigning beetle and a Pinacate beetle. Similar beetles have been known to be able to carry loads heavier than half a gram, the researchers said.

“We made sure the beetles could still move properly when they were carrying our system,” said co-lead author Ali Najafi, a UW doctoral student in electrical and computer engineering. “They were able to navigate freely across gravel, up a slope and even climb trees.”

The beetles also lived for at least a year after the experiment ended.

The team found, however, that the vibrations shook the camera and produced distorted images. The researchers solved this issue by having the robot stop momentarily, take a picture and then resume its journey. With this strategy, the system was still able to move about 2 to 3 centimeters per second — faster than any other tiny robot that uses vibrations to move — and had a battery life of about 90 minutes.

While the team is excited about the potential for lightweight and low-power mobile cameras, the researchers acknowledge that this technology comes with a new set of privacy risks.

“As researchers we strongly believe that it’s really important to put things in the public domain so people are aware of the risks and so people can start coming up with solutions to address them,” Gollakota said.

Applications could range from biology to exploring novel environments, the researchers said. The team hopes that future versions of the camera will require even less power and be battery free, potentially solar-powered.

“This is the first time that we’ve had a first-person view from the back of a beetle while it’s walking around. There are so many questions you could explore, such as how does the beetle respond to different stimuli that it sees in the environment?” Iyer said. “But also, insects can traverse rocky environments, which is really challenging for robots to do at this scale. So this system can also help us out by letting us see or collect samples from hard-to-navigate spaces.”

This research was funded by a Microsoft fellowship and the National Science Foundation.

Materials provided by University of Washington. Note: Content may be edited for style and length.