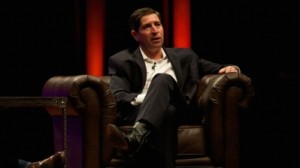 This is a list of some of the biggest and most transformative tech companies that have launched in recent years. It is also a list of companies included in the portfolio of the elite Silicon Valley venture capital firm Andreessen Horowitz. With a roster that deep, a startup gets more than just money when it gets an investment from the firm. It gets access to a network of connected professionals and the accolades and bragging rights that comes gratis with being included in such an elite cadre of companies.

But how does an entrepreneur get a ticket? What does it take for a Sand Hill Road legendary venture capital firm such as Andreessen Horowitz to take a pricey risk on your business?

“When you think about this business … about 50 percent of what we do goes to zero. We might end up getting a few pennies back on the dollar,” Scott Kupor, a managing partner at Menlo Park, Calif.-headquartered Andreessen Horowitz, told an audience last week at the 3686 South entrepreneurship conference in Nashville. “For those of you who are baseball fans, this is not a batting average business, it doesn’t matter actually how many hits you get when you get up to bat. It’s really a slugging percentage business, meaning when you get a hit, you have to get a home run. You are going to strike out so many times that you need something that can actually make up for all of those losses.”